The Aloha Tower in Honolulu Hawaii is probably the city's most famous landmark.  Built in 1926, the tower marked the arrival point for the passenger steamships from the United States mainland and abroad.

Before the time of mass travel, the arrival and departure of ships at the Polynesian Island of Oahu Hawaii were major events.  They were celebrated with hula dancing, the selling of leis and the playing of the local band.

The modern cruise ships still arrive at this famous tower but receive much less fanfare today. 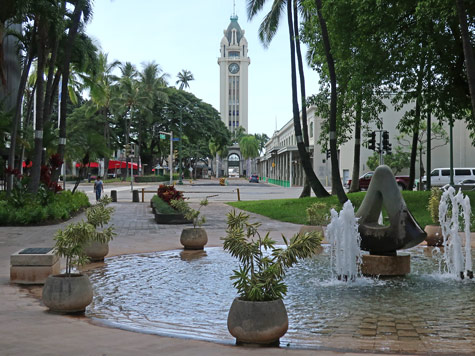 Visitors to Honolulu can enjoy a fabulous view of Honolulu harbor and the Honolulu business district from the top of the tower.

Access to the top of Aloha Tower is by elevator and is free of charge.