The Honolulu International Airport is the main airport on the Island of Oahu.  A large number of airlines offer flights to Honolulu from various cities in North America, Australia and Asia. The airport is located on the ocean, just west of Honolulu.

Inter-island flights are provided by Hawaiian Airlines and Aloha Airlines from the Honolulu airport to Maui, Kauai, the Big Island and the other Hawaiian islands. 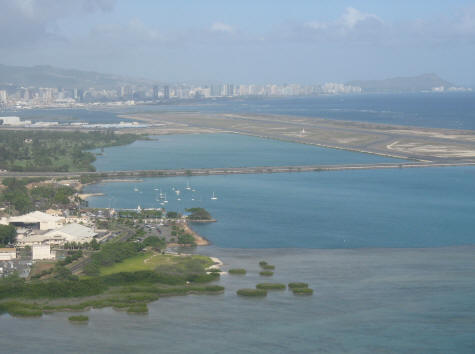 A city bus runs from the airport into downtown Honolulu and to Waikiki.  Ticket prices are $2 per person.

A shuttle service called the Airport Waikiki Express operates between the Honolulu International Airport and various hotels in Waikiki. Coaches leave every half hour and tickets cost $8 per person.

Automobiles can also be rented at the Honolulu Airport.